The National Museum Institute (NMI) a Deemed to be University, under the Ministry of Culture, Government of India along with the Comité International d’Histoire de l’Art (CIHA), National Museum, National Gallery of Modern Art (NGMA) and Indira Gandhi National Centre for the Arts (IGNCA) organized a three-day International Colloquium from November 28th, 2018 to November 30th, 2018 in New Delhi. 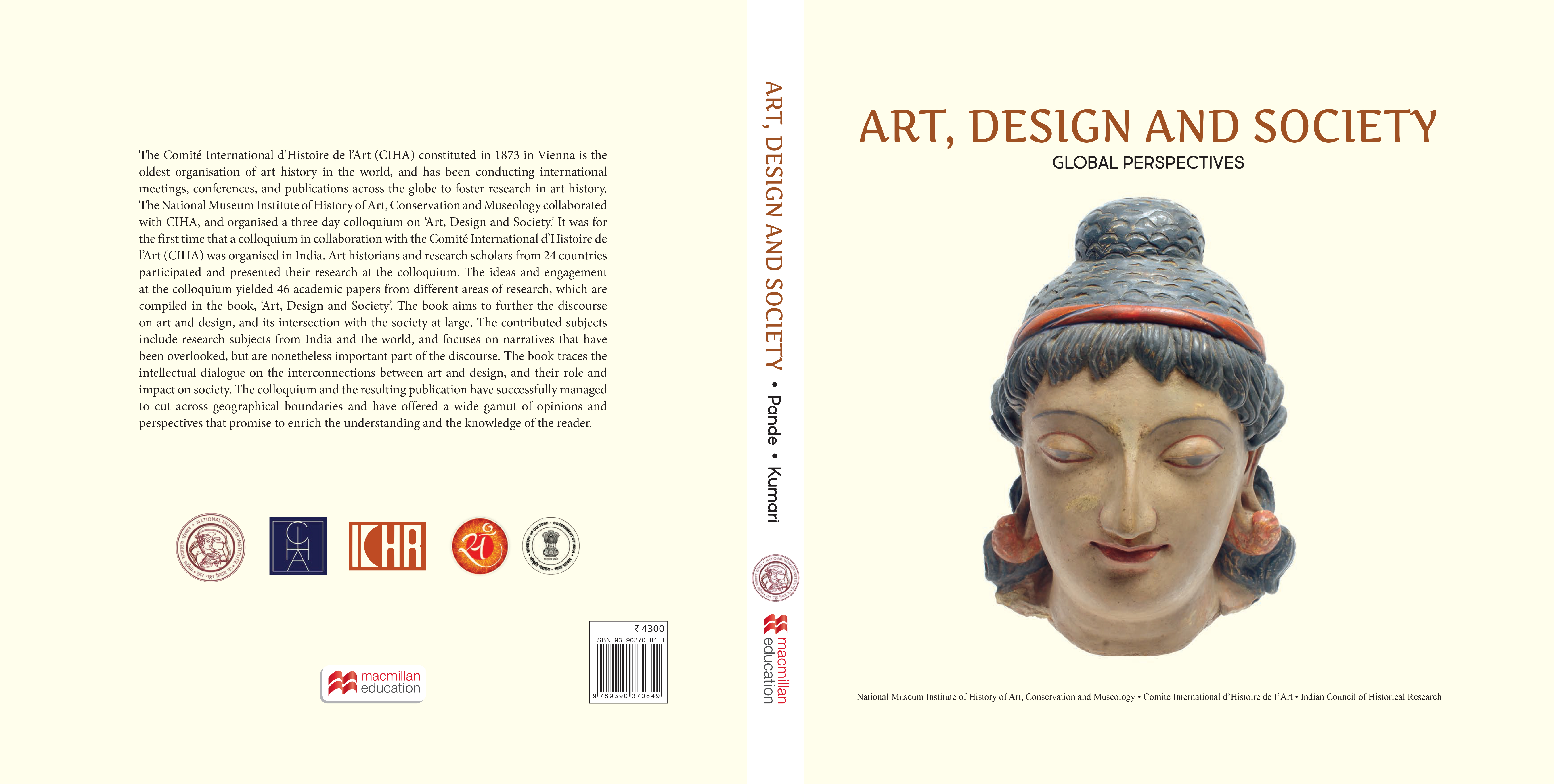 Proceedings of the Colloquium, Art, Design and Society: Global Perspectives have been published.

The National Museum Institute (NMI) a Deemed to be University, under the Ministry of Culture, Government of India along with the Comité International d’Histoire de l’Art (CIHA), National Museum, National Gallery of Modern Art (NGMA) and Indira Gandhi National Centre for the Arts (IGNCA) organized a three-day International Colloquium from November 28th, 2018 to November 30th, 2018 in New Delhi. It was in 2016, in the 34th World Congress of CIHA in Beijing that NMI proposed a bid to hold a colloquium which was unanimously accepted by CIHA. It comes off as an enormous milestone as the colloquium brought CIHA to India for the first time.

The theme and concept of the colloquium ‘Art, Design and Society,’ was based on the close affinities between art and design and the reciprocal influences of art, design and society. The triad of Art, Design and Society is a significant one, which made up for the raison d'être of the colloquium. Art imitates from society and society, in turn, also draws back from art. All art has design in it although not all design may be art. The colloquium aimed at bringing together the smaller narratives that have often been overlooked but which are nonetheless important parts of the tapestry of humanity. It has become imperative for one to re-examine the notions of art and design to understand the essence of the creative process across various cultures and encourage discussion and discourse on their interface and intersection with society. The colloquium predominantly intended to probe the role of categorization and enquire into the very frameworks within which art and design operate. The complex, shifting relationships between art, design and society gave room for interpretations and to stimulate discussion on them.

As part of the pre-colloquium on November 27th, a curated walk was organized for the participants around the collection of the National Museum. The walk was aimed to provide scholars from across the world, a glimpse of the rich historical and artistic heritage from India. Simultaneously, the delegates registered for the colloquium.

The first day of the colloquium, November 28th, began with the registrations. The event commenced with the inaugural programme where Dr B. R. Mani, Director General, National Museum and Vice-Chancellor, National Museum Institute, welcomed the delegates. This was followed by an address delivered by Prof. LaoZhu (Zhu Qingsheng), President, CIHA. Shri Shakti Sinha, Director, Nehru Memorial Museum and Library, presided over the programme as the Chief Guest and delivered the inaugural address. Dr John Guy, Senior Curator of the Arts of South and Southeast Asia, The Metropolitan Museum of Art, delivered the keynote address on “Art, Experience, Design: Collecting the Old World for a New Age.” The inaugural programme came to an end as Prof. Anupa Pande delivered the vote of thanks.

The first day of the colloquium contained a total number of eight sessions with 22 speakers. The sessions were based on the art of the ancient world, Paintings; where sacred and secular came together, Museum as a space, colonialism and its political propaganda and the intangible and tangible forms of art in various folk and tribal communities. The sessions were chaired by experts in the field of art history including Dr B. R. Mani, Prof. Susmita Pande, Chairperson, National Monuments Authority, Shri Adwaita Gadanayak, Director General, National Gallery of Modern Art, Prof. S. Simon John, Director, Arunachal Institute of Tribal Studies, Rajiv Gandhi Central University, Arunachal Pradesh, along with Prof. Catherine B. Asher and Prof. Frederick Asher from University of Minnesota, USA, Prof. G. Ulrich Grosmann, Director General, Germanisches Nationalmuseum Kartäusergasse Nürnberg, Germany and Prof. Roberto Conduru from Southern Methodist University, Texas, USA.

The second day of the colloquium was an all-day event at the National Gallery of Modern Art (NGMA). The second day contained a total number of 12 sessions with 33 presenters. They were themed under the impact of religion, colonialism and feminism in art, Islamic art and architecture, exchange - interface in art between different countries, jewelry and folk and tribal traditions in art. The sessions were chaired by eminent scholars including Dr Sachchidanand Joshi, Member Secretary, Indira Gandhi National Centre for the Arts, along with Prof. Jean[1]Marie Guillouët, Associate Professor at University of Nantes, France, Dr Marzia Faietti Director, Uffizi Gallery, Italy, Prof. David J. Roxburgh from Harvard University, USA, Prof. A. K. Das, Honorary Director, Lal Bahadur Shastri Memorial, Prof. Anne Dunlop from University of Melbourne, Australia, Prof. Manager Singh, and Dr Satish C. Pandey HoD, Department of Conservation, NMI. Later, the delegates took part in a curated walk at the National Gallery of Modern Art to walk through modern Indian and contemporary works of art. The walk helped the delegates in chronologically picking up on Indian art where they had left off from the National Museum.

The third day of the colloquium contained 9 sessions with 33 speakers. The papers were themed around art history and its allied fields, temple architecture, textile and applied arts, signs and symbolism in art history along with performing arts as intangible cultural heritage to name a few. The sessions were chaired by renowned art historians like Prof. LaoZhu (Zhu Qingsheng), from the Peking University, China; Prof. Thierry Dufrene from the Paris Ouest Nanterre University, France, Dr Chedha Tingsanchali, Associate Professor, Silpakorn University, Thailand, Prof. Andrew McNamara, Professor, Visual Arts in the Creative Industries Faculty of QUT, Brisbane, Australia, Prof. Joy Sen from IIT Kharagpur, Prof. Atsushi Miura from the University of Tokyo, Japan along with Prof. Anupa Pande and Prof. Manvi Seth, Dean (Academic Affairs), HoD, Department of Museology (NMI). The sessions were followed by the closing ceremony for the colloquium where Prof. Frederick Asher delivered the valedictory speech. As part of the closing ceremony, members of the board of CIHA were felicitated.

As part of the post-colloquium on December 1st, simultaneous trips were organized for Delhi and Agra. As a one day trip, the delegates visited Agra with Dr Satish C. Pandey and Dr Savita Kumari. They explored Taj Mahal, Agra Fort and the Tomb of Itmad Ud – Daulah. Furthermore, two simultaneous trips were organized around Delhi for Qutb Complex and Red fort Barrack. The trip around the Qutb Complex was led by Prof. Catherine Asher, where she conducted a walk explaining the history and the architecture of the Qutb complex. Simultaneously, the delegates received a personal and detailed tour of one of the barracks of red fort by Mr. Ashok Adiceam, DAG where he explained the concept of turning the barrack into an art gallery, thus creating an amalgamation of a medieval wonder and a colonial structure with contemporary art.

To sum up, CIHA India International Colloquium was a successful event that witnessed participation of around 200 delegates, with around 85 international and 120 national delegates. The colloquium aided by putting India at the forefront of art historical discourses in the global scenario. The colloquium brought together art historians and scholars from allied fields. This, in turn, provided room for stimulated discussions and interpretations on the intricate affiliation between art, design and society. The colloquium facilitated academic and methodological exchanges between art historians, archaeologists and museum professionals in India and the world over.